The bike light set, consisting of the SIGMA SPORT AURA 30 front bike light and CURVE rear bike light is the reliable companion for anyone looking for an affordable, user-friendly bike light set for urban riding. The battery-powered bike lights are easy to attach to the handlebars and the seat post and have StVZO approval. The AURA 30's lateral lighting elements improve visibility for others on the road. The bike light is attractive because of its compact, sporty design and 40-meter beam range. The CURVE rear bike light has extra-long burn time and will spice up the rear of your seat post with its sporty design.

Homogeneous lighting pattern
The AURA 30 is equipped with an LED. In combination with the high-performance optics, it distributes light uniformly. This prevents others on the road from being blinded and ensures good core, long-range, and lateral illumination.

Switch-on protection
Double-clicking the button switches on the AURA 30 USB, and a long press switches it off. This function prevents the bike light from switching on inadvertently (in a pocket, for instance).

Extremely long burn time
Its burn time of up to 29 hours and range of 400 m makes the battery-powered rear bike light usable for many evenings before the batteries must be replaced.

Function and design perfectly combined
The new lens design allows the rear bike light to be mounted parallel to the seat post. The rear light, which weighs only 27 grammes, can thus be incorporated subtly into your bike's overall appearance.

Tool-free mounting
AURA 30 and CURVE can both the mounted on your handlebars and seat post very quickly and without tools. The practical silicon holder on the handlebars is permanently attached to the AURA 30 and allows the front bike light to be attached quickly and precisely to any handlebars. The CURVE rear bike light can also be fixed to seat posts of various diameters quickly and without tools with the silicone strap included in delivery. The bike light set is easy to remove when it is not being used and can be stored conveniently in a pocket.

Water-resistant
The AURA 30 and the CURVE are splash-proof according to IPX 4, so they can be used in inclement weather conditions. 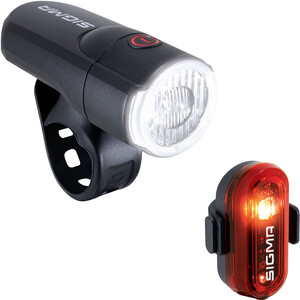