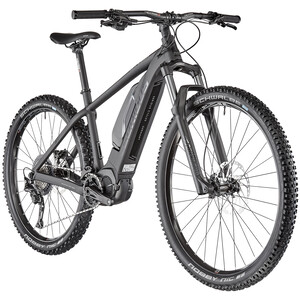 Mr E
crazy deal
I am writing the review just in case someone is struggling with the decision. There are no reviews on the net about this emtb; I bought it blindly without even testing it. Walter's review says that this one is almost identical to the previous version, which is incorrect. The old version looks like a normal mtb with a motor and battery put on it (I was able to find some pictures of it from a guy who was selling it used). This one has been designed - and looks - like a true emtb. First of all, I did a lot of research, and I was very undecided between the Serious and other more famous brands such as Cube, Canyon, etc. I was even more undecided if I wanted the Shimano E8000 or the new Bosch CX 4. I could have spent more money just for a better motor. At the end, I decided to not wait for the new Shimano EP8 and pick the E8000 over the CX 4 just because there are apps that allow to customize this motor to my preference and the CX I tried had a weird 'grrr' sound. And after you try them, you can't say one is better than the other; they are just different, but good in the same way. I went for the XL size - I am 187cm, 85kg - and it fits me perfectly even though I am at the minimum height with the seat post (400mm). I would not recommend going for this size for height <185. The bike looks great, much better than in pictures. Good perceived quality. You can clearly see it is a mullet with the bigger 29" wheel in the front. The motor is very well integrated and feels just like the other Shimano e8000 I tried. The derailleur is not an SLX but a Deore XT (even better). The breaks are an unbelievable pick for this price range. The fork is better than the Suntour they put in some more expensive HT, and it looks better, but it does not have the remote lockout control. The finishing kit is cheap, especially the saddle. I am going to replace part of it. The handlebar is too wide for my preference. The only thing that is bothering me is the 25km/h speed limit. When I commute I usually pedal around 26/27km/h and the motor cuts part of the time. The good side is that there is very little resistance once it stops. And during uphills and acceleration below the speed limit make you feel good about the decision of going electric. Would have I bought it if I could have tried it before? Definitely; on the spot. There are not other HT that go even close to this configuration for the price. PS: I registered for the newsletter and received a 10% discount. A true deal.